In a Time of Universal Deceit, Telling the Truth is Revolutionary.
Monday, October 25, 2021

About the Stimulus Plan… In the words of Arlen Specter (R – PA). 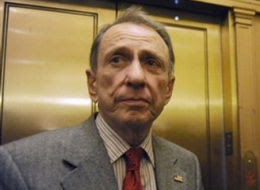 So only 3 Republicans voted for the Stimulus in Congress. That doesn’t mean they don’t want money from it sent to their states.

Here is Specter on the passage of the Stimulus Bill:

“I think there are a lot of people in the Republican caucus who are glad to see this action taken without their fingerprints, without their participation.

(When asked how many of his Republican colleagues really supported the bill:)
“I think a sizable number. I think a good part of the caucus agrees with the person I quoted, but I wouldn’t want to begin to speculate on numbers.”

Sooner or later they’ll either get bipartisan or be gone altogether.